Posted in FUD, GNU/Linux, Microsoft, Windows at 3: 01 am by Dr. Roy Schestowitz

“Concern trolling” for over a decade now, just like Mac Asay 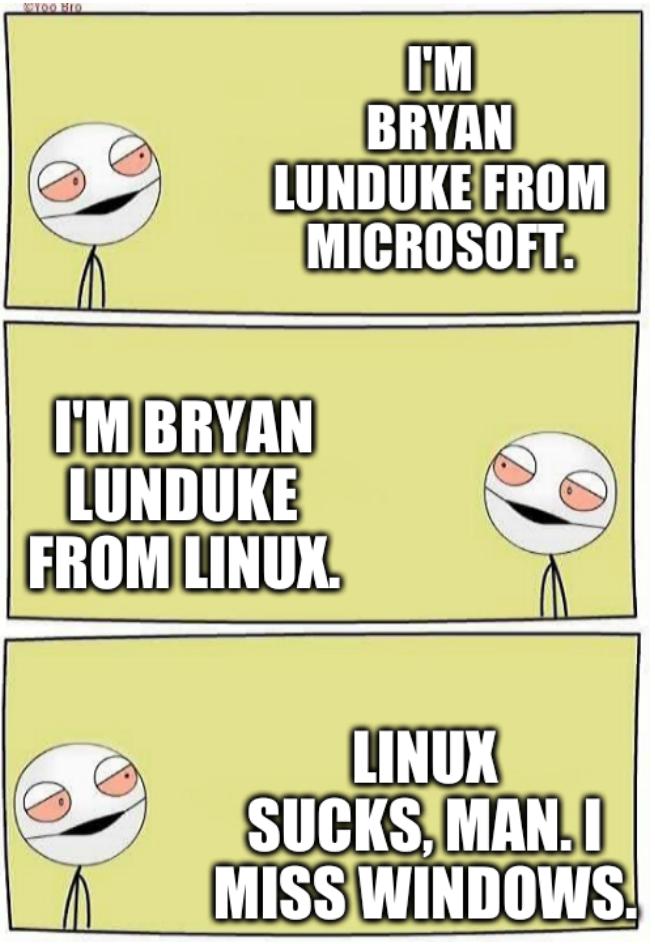 Summary: A point-by-point rebuttal to the latest revision of Bryan Lunduke’s anti-GNU/Linux talks, which he repeats every time he runs out of material and craves traffic

THE “Linux Sucks 2020″ video was released over a week ago and was later promoted by Slashdot even though it’s hardly new. I wanted to do a video rebuttal to it, but text would likely be more effective and easier to search.

“He talks dismissively about technical errors being pointed out by someone from Fedora.”This is the talk that caused us to argue with him over a decade ago, not yet knowing he had worked for Microsoft less than a decade earlier.

He starts the video with some irrelevant mumbles about the talk itself rather than something of substance. He talks dismissively about technical errors being pointed out by someone from Fedora. He tries to make that person sound like some stalking lunatic who sits in the front row to ‘heckle’ him (trolls are victims, right?). We skip all that and start with the actual ‘meat’. His first ‘slide’ (Microsoft Minecraft-themed) about Linux:

Yes, Windows has no bugs and no design issues. It’s just… perfect. Might explain why Lunduke Journal (his personal site) had so much praise and romantics about Microsoft and old versions of Windows these past few months.

Windows is just renowned for… its perfection. Riiiight…

“Might explain why Lunduke Journal (his personal site) had so much praise and romantics about Microsoft and old versions of Windows these past few months.”Perception games are effective; we have the likes of Black Duck slapping anti-Free software pieces every other day, on average, talking about licensing risks and security risks etc.

Instead, let’s just keep repeating claims about “Linux” being buggy while on the very same week it’s reported that Microsoft put on hold or blocked Windows patches, fearing they would brick lots of machines. On the very same week this video was released!

“Instead, let’s just keep repeating claims about “Linux” being buggy while on the very same week it’s reported that Microsoft put on hold or blocked Windows patches, fearing they would brick lots of machines.”After this substance-free rant he’s doing self-promotional, self-congratulatory chit-chat for no longer than 2 minutes and nothing less than 1 minute. So here we are almost 10 minutes into the video and there’s still zero material of relevance.

“Be excellent to each other,” he then says. Way to censor potential critics of his, as hypocritical as it may be. Like he’s very polite himself.

Then he promotes a sponsor, spending loads of time doing a scripted ad, naming products and all sorts of other crap, with all details down to pricing.

OK… finally! Some material. From the slide:

He skips this altogether.

So… GNU/Linux does not suck after all. He’s bailing out. Looking for ‘softer’ targets…

So typical, so predicable.

Facts don’t sell, do they? And hey…

“Be excellent to each other,” except when you nitpick on negatives.

Not naming a single one of them. Here again are these ‘blanket’ claims of “BUGS” in GNU/Linux, even in servers.

Saddest? Let me guess. Android doesn’t count as Linux… even though it’s the most widely used operating system (a lot more than Windows in 2020), but…

Since this has been Lunduke’s ‘feature’ (and pinned!) video for over a decade, gotta keep on with the false narrative of Linux “sucking”.

Even when it doesn’t.

First of all, now he changes the subject or moves goalposts. So it’s the saddest thing that “Linux owns mobile.”

Suddenly what matter is the ‘branding’ (“Unrecognizable.”) and all of a sudden it’s about software freedom rather than “Linux”, and ever mind if Linux itself remains Free software and makers of mobile devices are compelled to comply with the GPL, so they routinely publish their kernel sources (we cover examples of this every week or so in our Daily Links).

“So this kind of crap resembles what it was over a decade ago when he told his viewers to go to my site and curse at me (which they did).”So now he admits Android has “Linux” in it and here we are at exactly 10 minutes (elapsed) and I’ve just about grown tired of this video entitled “Linux sucks” but demonstrating nothing whatsoever to that effect.

So this kind of crap resembles what it was over a decade ago when he told his viewers to go to my site and curse at me (which they did).

“Be excellent to each other,” he says. While siccing his trolls at his critics. Typical Microsofter. No point viewing this video any longer…

To quote what his viewers whom he sent to my site wrote in the comments (we never censor comments):

That language came from Lunduke himself: “Boycott Novell seems like it is written by poo poo heads”.

“The important part there is the use of “poo poo heads” as a phrase. I think that should be the phrase of the day on boycottnovell.com,” he also tweeted.

Another comment later: “Don’t be a bunch of poo poo heads. Bryan was just giving linux some tough love. He and Chris love and use linux as their main boxes.”

Another one: “Boycott Novell are poo poo heads.”

So the troll from Microsoft sent trolls at us, repeatedly egging them on in videos, in tweets etc.

“Be excellent to each other,” he now says. What a liar. What a hypocrite. █

Send this to a friend