Mockoon is free software to run mock APIs locally. Use this software to create and test API locally without hosting them on a remote server. It lets you create an unlimited number of mock local servers and routes and it calls them environments. You can create them in any number and specify the response body with a response code. If you want a quick tool to run mock APIs then you can simply use Mockoon. The servers it creates for you are fully customizable and you can change the localhost path along with the port numbers. The routes can be assigned GET and POST methods along with the API parameters.

The mock APIs that you create here are compatible with OpenAPI and there are other features in it you will like. It supports JSON templating, proxy mode, HTTPS, CORS support, import/export, and autosave. You just need to simply create the API server with the paths you want and then deploy it. You have complete control over the server as here you can opt for regex paths and file serving. And one of the best features here is that you can run it on any platform with ease. It is an open-source as well and you can take part in its development and do much more. 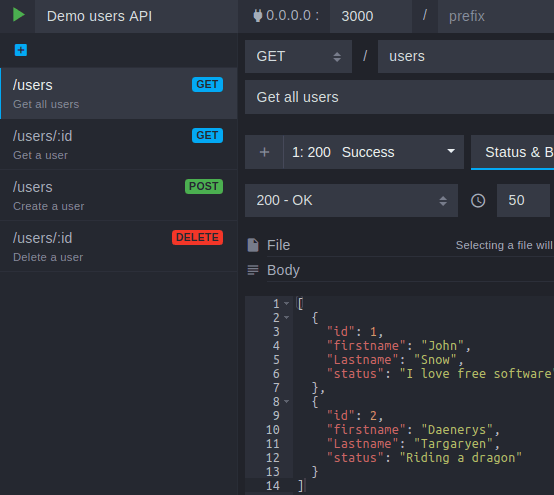 You just download Mockoon from here for your platform and then simply run it. No matter on what platform you are, you will find the binary for that and then you can just quickly get started. The main UI of the tool looks as shown in the screenshot below. It comes with some pre-defined routes and JSON responses. 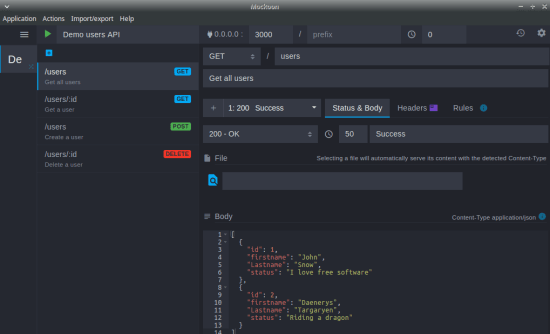 Now, you can start adding new routes or modify the existing ones. For every route, you can specify status code, a response body in JSON format, headers, rules, and you can create as many routes as you want. While creating a route, you just have to specify will it use a GET request or a POST request. 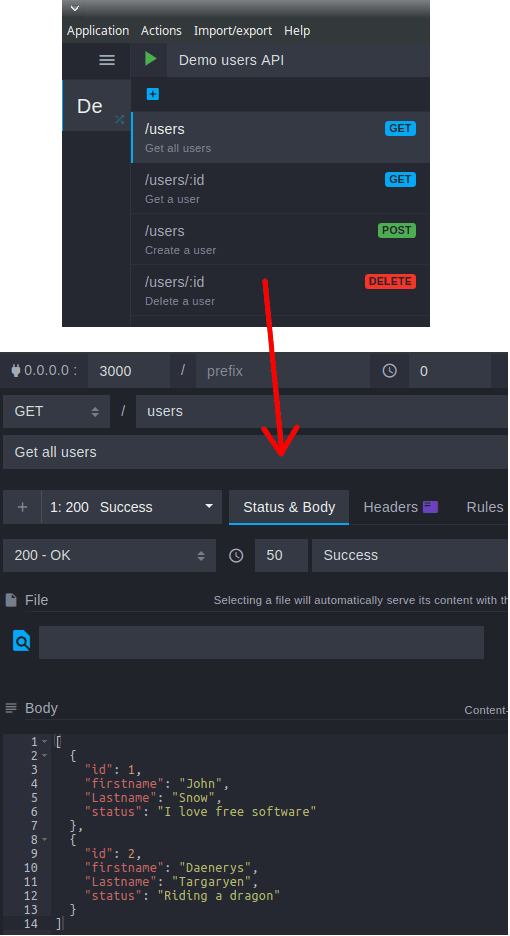 After you have created all the routes and responses then you can just start the server. Just hit the play button from the top right side and then start making requests. This is simple and you can see the working example for which I used my browser. Just see the screenshot below. 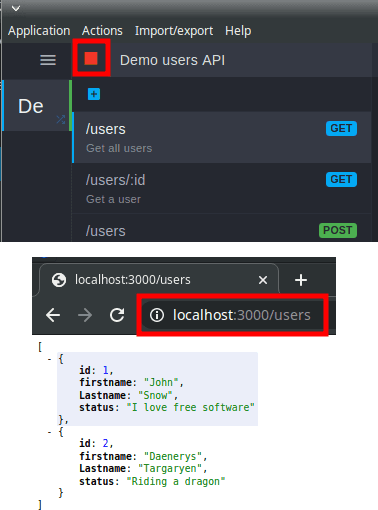 To create a new server, you use the Actions menu. And use the same menu to create a new route. You can create unlimited servers in it with different routes and run them parallel. This is easy and not only this but the API that you create with this can be exported to a file. For the export, it supports swagger and OpenAPI format. To export an API, you just use the “Import/export” menu of the software. 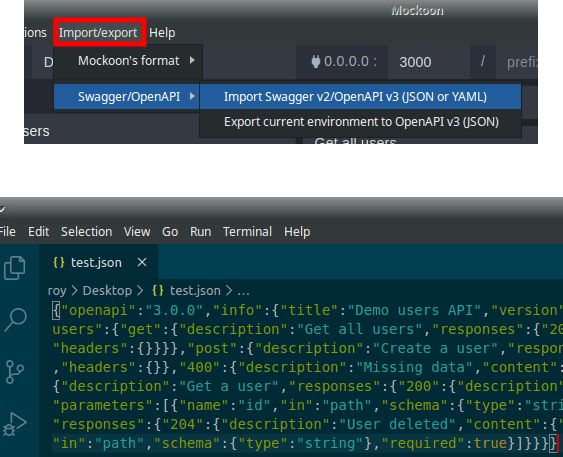 In this way, you can create and run any number of mock API servers on your PC. The software is simple and powerful that you run on any platform and even export the mock API structure. If you often work with web servers and APIs then it will come in handy.

Mockoon is an amazing tool you can use to create and run mock APIs. What I liked best about this powerful software is that you can run unlimited servers and even export the data. If you looking for an API mockup tool that is free and runs on any platform the Mockoon is a great option. So, try it and design simple as well complex APIs and let me know what you think about it.

” I’m the last survivor of a dead culture. And I do not truly belong worldwide anymore. And in some methods I feel I should be dead. […] In regards to effect on the world, it’s great that I have actually lived. And so I guess, if I might return in time and prevent my birth, I wouldn’t do it. However I sure want I hadn’t had so much discomfort.”

Summary: We’re concerning a point now where monopolies are dictating to Free software developers the method they code and act; the trouble is, if we work/operate based upon the guidelines of monopolies, we’ll never ever be successful in making these monopolies outdated and never ever liberate/unshackle ourselves from them

T HE FSF belatedly reacted to the GitHub threat numerous months ago. A lot of us had gotten in touch with Richard Stallman and months later on the FSF said it would improve its development structure to make it more like social control media (we presume with Gitlab as base/template).

Microsoft shrewdly prevented antitrust scrutiny when it purchased GitHub (fiction like “Microsoft likes Linux” assisted), making use of the ‘network result’ to obtain a monopoly it might never ever develop with CodePlex (not even remotely). Heck, last month I discovered that my GitHub account that I erased 2 years back is still there and still publicly noted

After pushing RMS out (let’s face it, they put amazing pressure to trigger him to resign; it wasn’t wilful) the FSF started resorting to wordplay of the ‘hipster’ types, not the hacker types. I personally preferred the messaging of the RMS days; nothing wrong with some abrasive words when specific business very much deserve it. So it’s more or less anticipated that now they desire something “social” and began pursuing “mobile-friendly” design for the FSF site (as if “wise” phone ownership isn’t a regressive development; in China they enforce aggressive malware on those, presenting it in particular “hot” regions first).

I myself have actually established software application given that I was15 If you can not compose decent code, then no amount of “social” and “likes” (or GitHub “stars”) will compensate for it. Any appeal contest need to be based on unbiased benefit, not “click farming …”

Of course the FSF is complimentary (as in liberty) to do as it pleases; but many people out there think that the FSF should educate the general public instead of be ‘educated’ (or lectured) by the public into a “mobile-friendly” (i.e. crap, very little, doing not have navigation choices and still very bloated) style, a “social” advancement framework and so on.

Here in this site we still utilize a theme from 2006; it deals with practically all devices made in the previous 1.5 decades, it’s relatively light (you do not need to download fonts to simply render a single page) and it’s backward suitable in a lot of methods. Pages still look the like they did 13 years ago (sans banner modifications at the top).

The hacker movement will die if we’re caused making a lot of concessions that we become what we fought. And even taking money from what we’re expected to change. █

” Corruption and hypocrisy ought not to be inevitable products of democracy, as they certainly are today …”

Send this to a friend